I thought I’d share a new recipe I tried. I have actually been trying many new recipes in the last two weeks. I just haven’t been taking pictures…

This is a Whole30 recipe. Before you start freaking out about not giving up your sugar and dairy and gluten- hear me out. I’ve never been on a diet before but I felt this was necessary. I love my sugar. I love it in ice cream, cookies, ice cream, cake, ice cream, pies, ice cream cake, and so on. I love sugar. And over the years it has occurred to me that I eat a heck of a lot more sugar than other people do. So I am kicking the habit. That’s it. That’s the biggest reason I am doing this.

So I knew I’d have trouble with this diet for many reasons I can visit on at a later date. Because of this, I wanted something that just walked me along so that I focused more on the next step rather than the sugar I was missing.

Enter this website. Excellent. It plans every meal out for you. Even gives you the grocery list. A slightly intimidating list- but I did it. Even with an unhappy toddler in tow. No small feat.

We have had some excellent meals this way. Really. I will make them again after this 30 days is finished.

Here’s what we had last night(you know-when I finally remembered to take pictures). Oh, and this one is in the slow-cooker- nice in the hot weather.

So you take some canned artichokes, quarter them and put them in the bottom of your slow-cooker. If you’re a real foodie, you may gasp at the whole “canned artichokes” bit. I was like,”Where do you find artichokes?” Obviously not a foodie. But I do like to eat- does that count??? 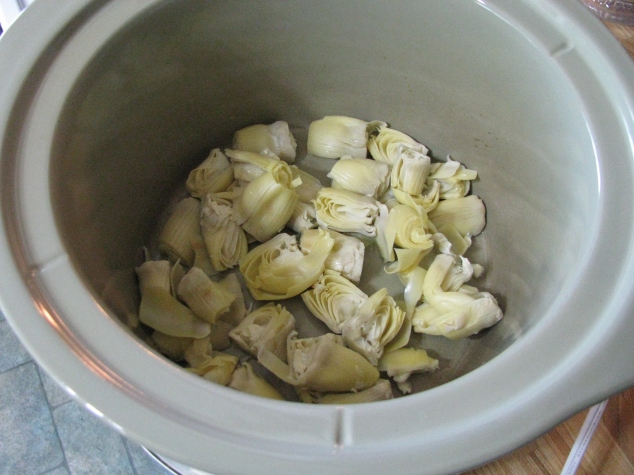 Next I sliced up some lemons and some carrots. The carrots were actually just for me to eat immediately. They have nothing to do with this recipe. 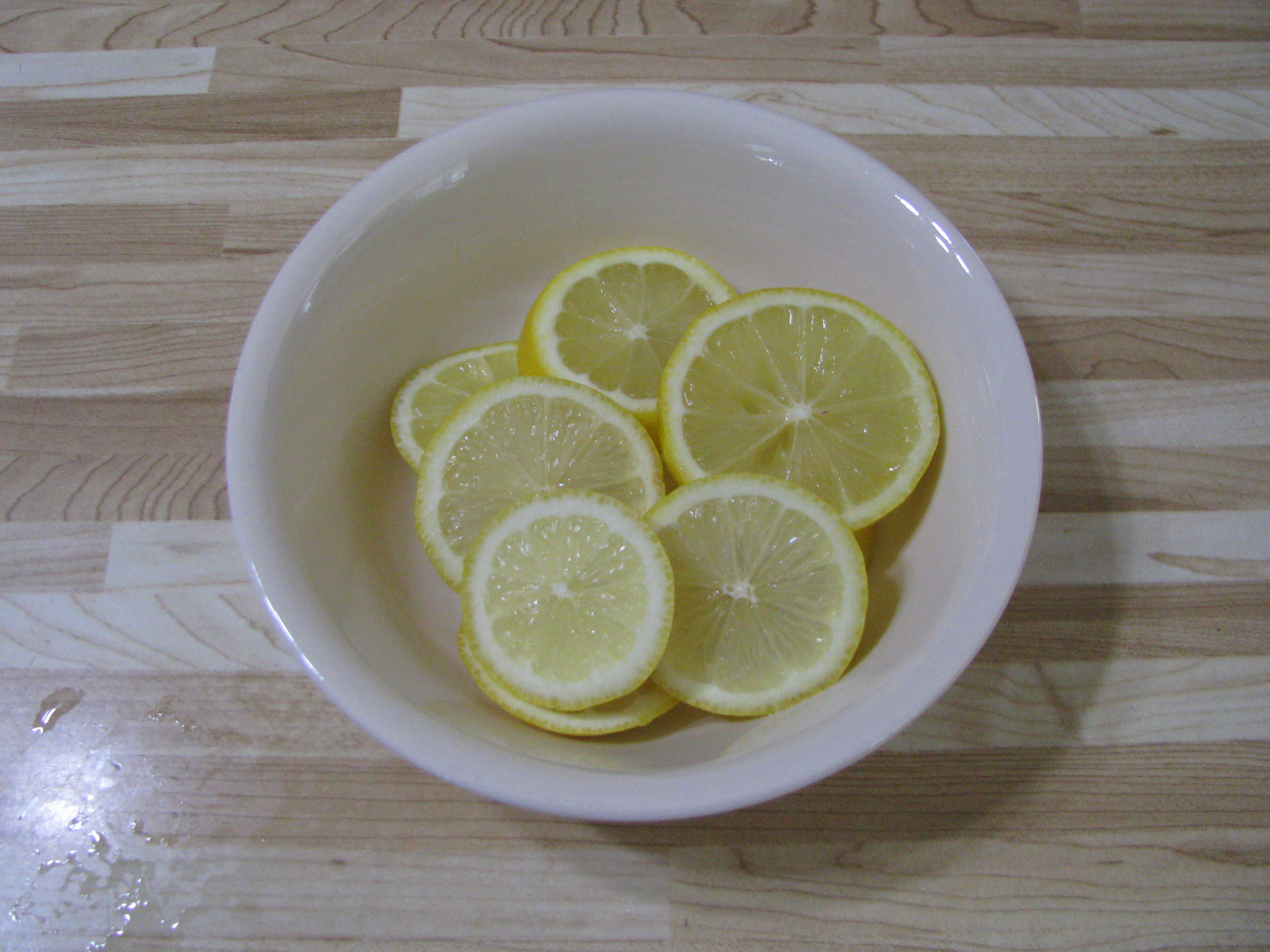 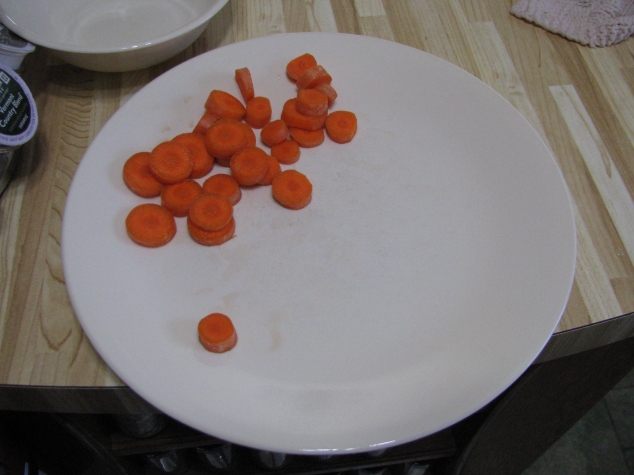 Then I took the skin and fat off of chicken thighs, sprinkled them with salt and pepper and finally lightly browned them on both sides in a skillet. 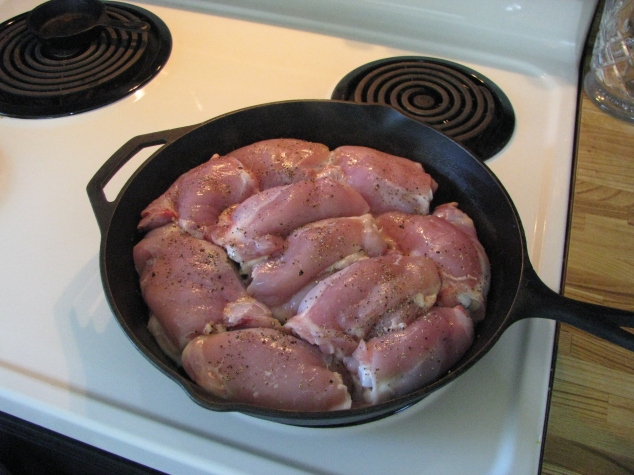 I did this all in a backward way from what the recipe said. If I did it the right way- it would have gone more quickly. But I was trying to save myself from cleaning extra dishes. Oh, the shame.

So when the chicken was browned a bit, I laid it over the artichokes. BTW- I put in 2 extra thighs because I’m a rebel. And because it was packaged that way.

Then I mixed up some chicken broth, arrowroot starch, and coconut milk. I poured it over the chicken and laid lemons on top. (Actually, I put the lemons on first, then glanced at the directions and took them back off to pour the broth mixture on. Then I threw those babies back on. Doesn’t matter except for the pictures people!) 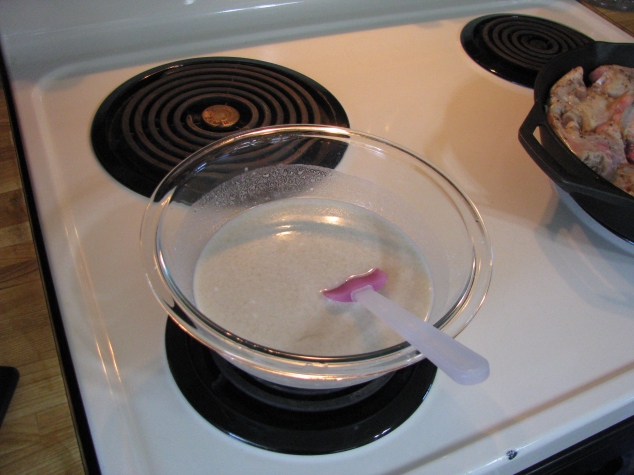 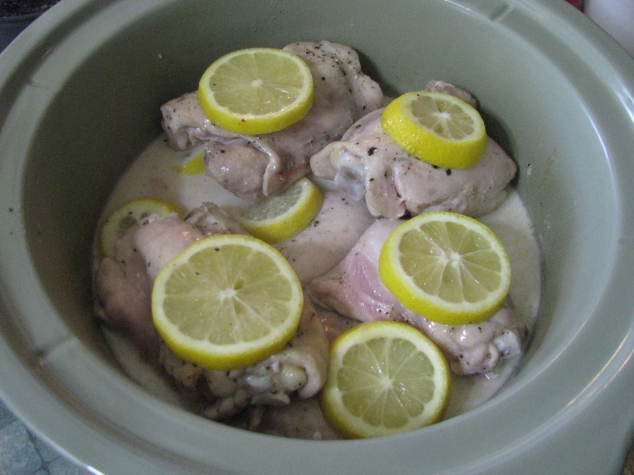 Cook it on high 4-6 hours. Remove lemons- I don’t care where. Just don’t put them back in your Crock-Pot! They’re super soft at this point anyway. Ugh. Take the thighs out and shred them with 2 forks. This is super easy. Mix up a little more of that starch and some water and stir that into the liquid in the cooker. Then add your chicken back in and mix it all up. 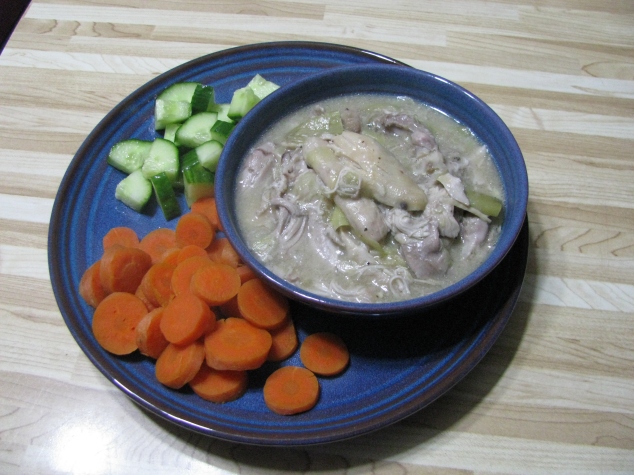 So I had some more carrots…

This is what it looks like when you’ve finished and decided it’s kind of a stew. And that you have to have some other veggie with it, because…BECAUSE. (I have this fear that on a diet you have to starve, and I let this fear drive me to make extra food. Sad really.)

This does not look like the photo that came with the recipe. She obviously did not shred the chicken before her photo!

What did I think of it?

Pretty easy to make. My husband loved it. Do you like honey lemon cough drops? The flavor of this kind of reminded me of them. It was okay, but I kept thinking of those cough drops which I don’t care for. My husband loves that flavor. So it was a hit with him. Our daughter liked it too. There you go. Try it.:)

Stay tuned…I have more coming. Especially from that website(ourpaleolife)– check it out. She’s got some great recipes.

Have you been cycling through the same meals for supper? I have. Getting tired of them? Yup!

I thought it would be a good idea to start introducing new meals into our nightly rotation. I should tell you now that I am not a gourmet chef. In fact, until I got married I hardly ever cooked meals. Just simple stuff like grilled cheese. And it wasn’t any four-cheese-smoked-gouda type of grilled cheese. Just some fluffy enriched white bread and some yellow American cheese. Hmm. It’s been a long time…

Anyway, I went through the cabinet where I stored all of my recipes and recipe books and made a stack of recipes to try. Mostly so I could get rid of some of the books in my Thursday declutter box, but also because I’m tired of making the same old, same old.

My one stipulation for the recipes I try is that I must already have most of the ingredients called for. I don’t want to have to buy any more than 2 or 3 ingredients. That can break the bank folks!

Also, I’m going to try just one recipe a week because I meal plan, and let’s face it, when you meal plan you’re kind of used to the luxury of knowing how long your meals will take to make. Trying a recipe for the first time usually takes a bit longer for me than the prep time given with the recipe. So I’ll save the new recipes for a night when I have more time to make them.

So if you want some new ideas for dinner/supper- follow along!

Today’s recipe is Farmhouse Hash with Eggs from Sandra Lee’s Money Saving Meals & Round 2 Recipes. Click on the name of the recipe if you want the specifics on how to make it. I’ve had this book for at least three years and finally decided to look through it when I decluttered my microwave cart/cabinet. I decided this had a lot of recipes I’d like to try. 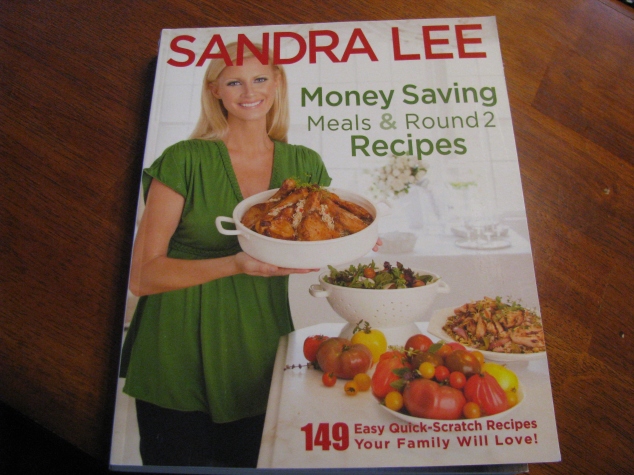 So, this meal is supposed to look like the picture below. 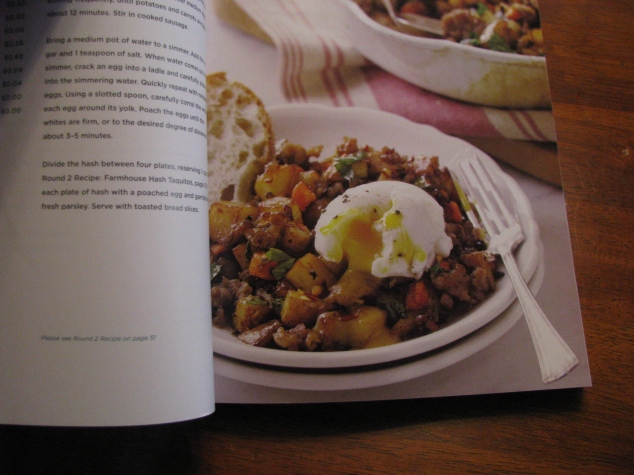 This type of meal is something my husband typically likes: meat and potatoes. 🙂

I had to brown up some sausage first. Be warned- I cooked a lot of sausage! Especially since the recipe only calls for a half pound of the stuff. This came out of a 2 pound package. I just fried it all up because I freeze the excess to save time in preparing other meals. 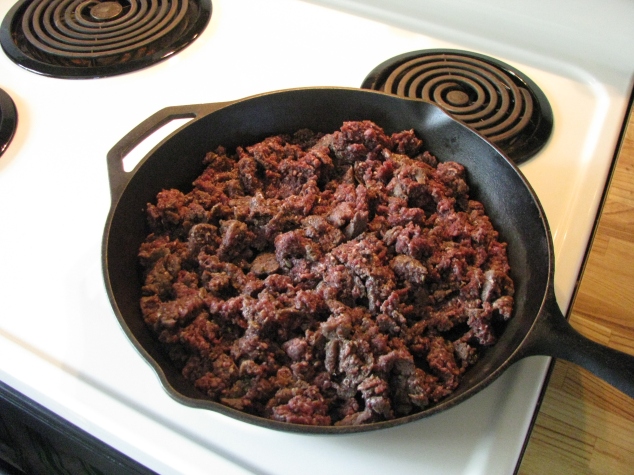 Two pounds of sausage right there. Note: only half a pound needed for this recipe.

While I fried up the sausage, I started dicing up carrots, potatoes, and onions. The recipe does also call for celery, but my husband has an unnecessary amount of malice toward that veggie so I left it out. 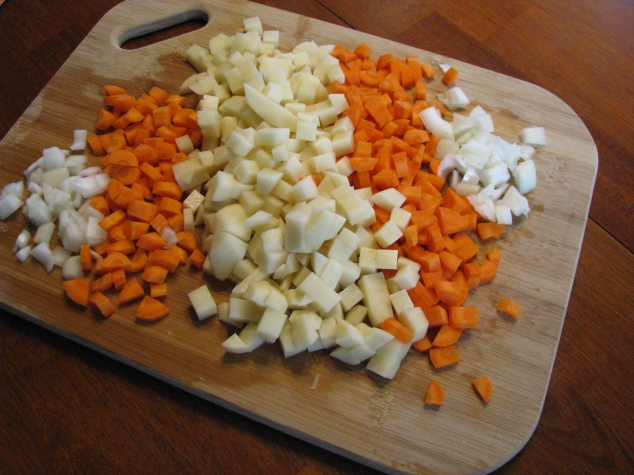 So lovely, and a little OCD. Don’t judge!

After the sausage was finished, I emptied it into a separate bowl and started cooking the diced vegetables.

You have about 12 minutes for those veggies to cook. At this point you put some water on to boil in a pot big enough for 4 poached eggs. So I put the water on medium heat and started washing some dishes. I stopped every couple of minutes to stir the veggies and, later, to add the eggs to the water. They did stick a bit to the fry pan- the veggies I mean.

Not pictured: poaching eggs. Why? Because I don’t do well at keeping the whites together on them and it just looks so messy!

So if you’re poaching eggs and it seems almost disastrous- take heart! The meal still came out looking like this and I think it looks pretty close the book’s picture. 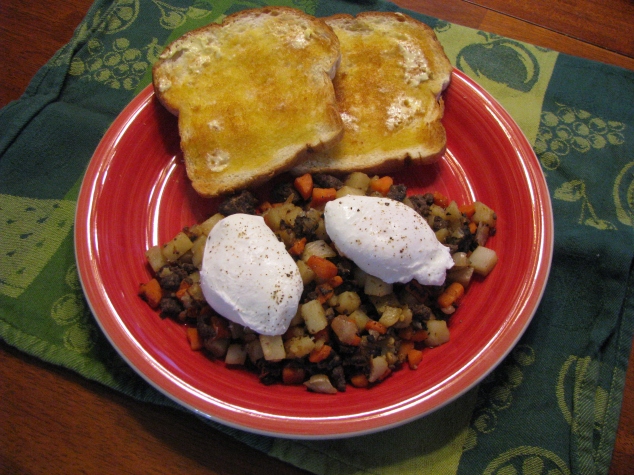 So, there were some other ingredients like garlic, paprika, white vinegar(for the poaching), red pepper flakes, salt, pepper, and parsley. I didn’t use the parsley because I didn’t have any. The red pepper flakes did add a little heat to the meal, so if you don’t like spicy I’d omit them.

Overall, it was a pretty easy meal to make and we really liked it! My husband said he would like to have it again, so I’m putting it in the rotation.

As I try more recipes, I think we’ll get a lot more in the meal rotation and I am certainly ready for that!